← more from
Shadow World
Get fresh music recommendations delivered to your inbox every Friday.
We've updated our Terms of Use. You can review the changes here. 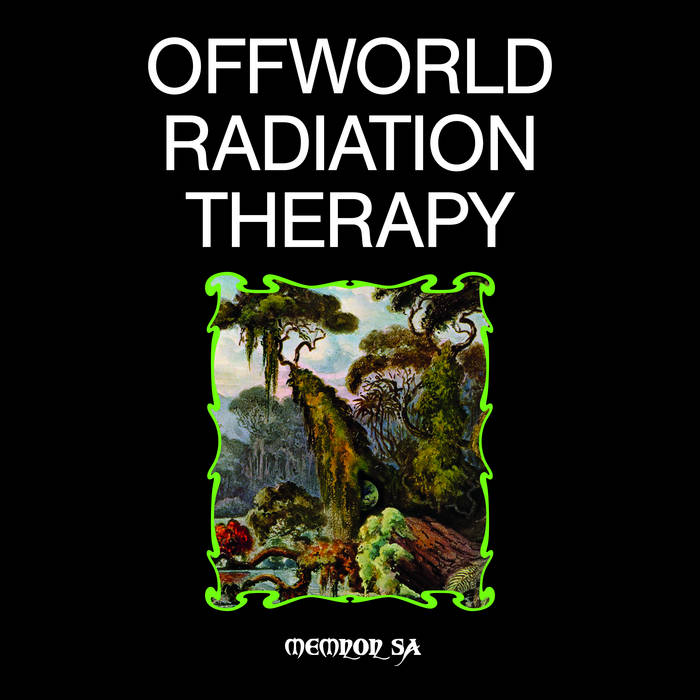 For the last few years Memnon Sa has been Misha Hering’s outlet for exploring the depths of his imagination. Using his London HQ, the now legendary Holy Mountain Studios (Spiritualized, Idles, 40 Watt Sun) as his own personal laboratory, he has released three sprawling albums: Citadel (2014), Lemurian Dawn (2018) and most recently the acclaimed World Serpent (2020). For his fourth album, and first on Shadow World, Hering’s efforts have been fully galvanized by the world he now finds himself living in. Initially forged in the deep-seated context of teenage hip-hop fandom, but now immersed in the explorative sonic worlds of new age, jazz, kosmiche and doom metal, Memnon Sa stands alongside his contemporaries Virginia Wing, Xam Duo and Duffin as the deeply esoteric and cerebral member of this group of long-standing friends and collaborators.

Like so much creative, social and industrial output post-2021 the world over, Offworld Radiation Therapy has been significantly coloured by Misha’s experiences during the global pandemic. Retreating from the UK on the last plane back to his home of Geneva, Switzerland in 2020 to care for his parents for what he initially thought would only be a month or two, Misha ended up staying and settling, trading Hackney’s hustle and bustle for the stark contrast of the Swiss alps’ rural peace and tranquility. ORT is the story of that mental and emotional journey, charting the personal and shared trauma that we are all still processing, and how this was guided by the dystopian “leadership” of international politicians. Through the peaks and troughs of hope, mourning, corruption and lies, not to mention the illness itself, this was a late-20th century sci-fi film played out in real time.

Offworld Radiation Therapy looks forward, past this fog, by utilising a long-forgotten form of futurism; one which imagines a true utopia. Channeling a vanguard that was once the preserve of composers such as Jon Hassell, scientists/dreamers like Carl Sagan, or popular culture creators Gene Rodenberry and Ursula K. Le Guin, the Audio-Visual package that makes up ORT serves as a suggestion of a better world after this one. A world in which humans restructure society to place sanctuary and safety above that of growth and acquisition, in turn discovering new natures within which we may seek refuge among an increasing sense of humility at our true position in the hierarchy of the universe.

Capitalism ignores and resists the fact that we are not the true masters of nature, and as the dust settles on Covid-19 we are beginning to collectively experience this realisation. In Switzerland, Misha and his wife retreated to the idyllic surroundings of mountains and forests, living away from built-up society for over a year within a utopia of their own creation. In that time the melodic and textural results of ORT revealed themselves as a crystalline mirror image of their new environment. Among spiraling saxophone and crashing drums, dazzling modal synth melodies slowly unwind, almost spiritual in their resolve and scale. This is music of human gratitude, humility and an overwhelming awe of nature and technology; a small glimpse into the possibility of what could become of civilization.

On the record’s players, Hering muses: “Duffin brought some real wildness to the record, adding a woozy, chaotic element that accentuated the malaise of emotions in the compositions. His playing reminds me of John Zorn or Jon Hassell. In hindsight I feel like the record is quite similar to some of theirs, in that it isn’t quite defined emotionally. There is a lot of pushing, pulling and ambiguity. Duffin definitely heightened all of that.” And regarding its grandiose rhythms: “Andy Prestige plays fantastic drums on the album too. To date, my favourite drumming on any Memnon Sa record. It never gets too heavy and never gets too funky, keeping the music from sitting comfortably within any specific genre, which again reinforces the emotional and stylistic blurring.”

Mixed by Misha Hering at Hollow Earth
Mastered and cut by Adam Gonsalves at Telegraph Mastering
Artwork, layout and design by Joe Burrows and Dan Burrows

Bandcamp Daily  your guide to the world of Bandcamp